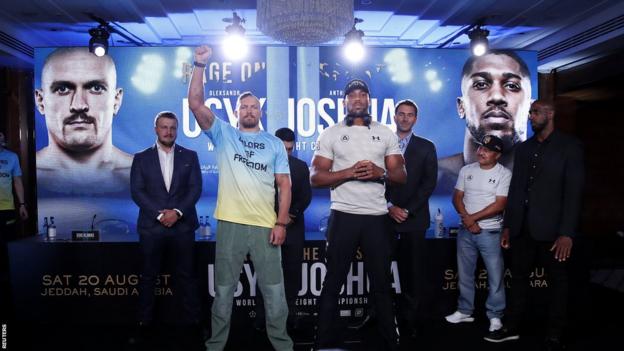 Anthony Joshua says he is 'desperate' to beat Oleksandr Usyk in their on 20 August.

Usyk took Joshua's WBA (Super), IBF and WBO titles in September, but the Briton, 32, is "hungry" to become a three-time world champion.

The fight takes place at Jeddah Super Dome in Saudi Arabia and Joshua said: "Let me get in there and do my job.

Joshua won his one other rematch in his professional career, when he beat Andy Ruiz Jr on points in a 2019 contest, also staged in Saudi Arabia.

"I'm definitely desperate to get my hands on the titles," he added.

Usyk is undefeated in 19 fights, but caused a big upset when he dethroned Joshua following a step up from cruiserweight, where the Ukrainian was the undisputed champion.

The 35-year-old has seen his life as Russia invaded his homeland.

The rematch was delayed until August and the decision was then taken to hold it in Saudi Arabia,

The Gulf country has and is currently launching a military operation in Yemen that has caused a humanitarian crisis.

Usyk wore a Ukraine-inspired blue and yellow 'colours of freedom' T-shirt to the press conference in London and, in a short speech, appeared to deny the suggestion money was the motivation for travelling to Saudi.

"Everything I do in my life, the way I live and the way I fight is something I enjoy," he said.

"I'm just doing my job now and I will continue doing this while my heart is beating. The only thing I am on my way to doing is to save my soul. But everything else that is happening to me is just life."

At a press conference last week in Saudi Arabia, the about sportswashing fears and there were no questions allowed during the London media event.