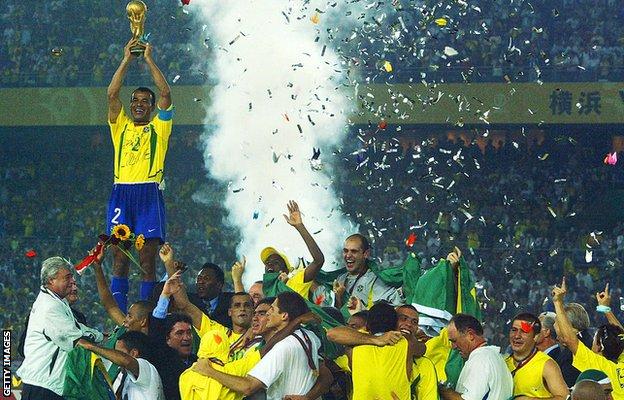 World Cup-winning Brazil captain Cafu says Liverpool's Trent Alexander-Arnold is "one of the best right-backs in the world" and that the Englishman's style of play reminds him of his own.

Alexander-Arnold, 23, has had another stellar season with the Reds as they remain in the hunt for four trophies.

Liverpool have won two domestic cups so far and are in contention to claim the Premier League and Champions League.

Cafu said Alexander-Arnold's progress since his debut has been "amazing".

The Liverpool academy product has been a mainstay during Jurgen Klopp's reign, playing more than 200 games since breaking into the first team in the 2016-17 season.

He has had another productive season, providing 19 assists in all competition as well as scoring twice, lifting silverware in the Carabao Cup and FA Cup.

The next week will decide whether Liverpool can do what no other English team has done and win all four major trophies in a single season. They host Wolves on the final day of the top flight on Sunday and face Real Madrid in Paris the following Saturday.

Cafu, who spent most of his career in Serie A with Roma and AC Milan, told LotterryTreasure Sport: "I have been following Alexander-Arnold and the campaign he has had at Liverpool. His progress over the last few years has been amazing and for sure is one of the best right-backs in the world.

"He is young, strong and has developed hugely considering his age. He also has a lot of experience and I see a lot of similarities between him and myself.

"We both had a will and commitment to attack, to go forward and have the boldness to shoot and to put the crosses in. The diagonal movements he makes on the pitch are also similar to what I was making as a player."

'England have a good chance to go far'

Saturday marks six months to go until the start of the 2022 World Cup in Qatar, with England playing on the opening day against Iran at the Khalifa International Stadium.

Since taking over in 2016, Gareth Southgate has galvanised a side which is currently ranked fifth in the world, breezing through qualifying with an unbeaten record, and reaching last summer's European Championship final when they lost on penalties to Italy.

"I have been following England and the evolution of their national team has been very good under Gareth Southgate," said Cafu. "Along with Portugal, I consider England as the team to have evolved most on the pitch in the last few years.

"They have a very strong squad with individual players who are performing at a very high level for their clubs. This helps the national team and the progress they have shown with their players means they have a good chance to go far in the competition.

"If the England players listen to their coach as a group, then they have a better chance of winning."

World number one and five-time winners Brazil go into the tournament as favourites, possessing a squad packed full of talent with a spine including Liverpool duo Alisson and Fabinho and Paris St-Germain pair Marquinhos and Neymar.

Former Selecao full-back Cafu, the country's most-capped player with 142 appearances, is the only man to appear in three consecutive finals - winning in 1994, losing in 1998 and skippering the team to triumph in 2002.

But they have not lifted the trophy since, with the past four editions won by European teams.

Cafu, who is an ambassador for this year's World Cup, said: "Every competition that Brazil steps into there is the pressure to win it. They are a huge country in the world with a huge history.

"The pressure to win is always there in any game, not just the World Cup. We have a very good generation of Brazilian footballers coming through so the expectation is there as usual.

"It is about time we won, it is clear if we don't win the World Cup it will be a failure. We all have the expectations and hopes that we can do it. The most important thing is to play a good World Cup and be competitive, then the final result is something no-one can predict."

England and Brazil are in opposite halves of the draw and should both sides finish top of their groups and progress through the knockout stages, they would meet in the final on 18 December at the 80,000-capacity Lusail Stadium in Doha.

Cafu was born on 7 June 1970, the same day the two sides met in the group stages of that year's World Cup.

He added: "For the Brazilian people it would be considered a dream final because of the historical weight of the two nations in football.

"This match would carry huge emotion and it would be beautiful not only for the fans of England but also for football in general."