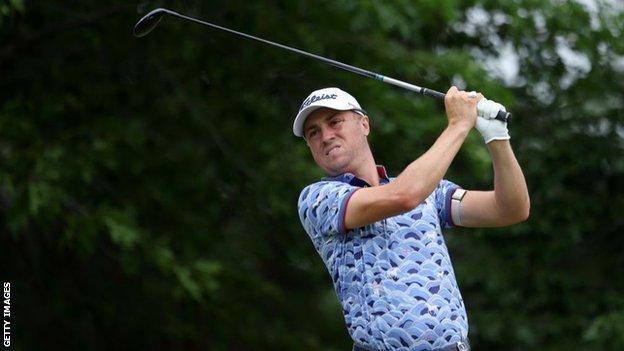 Justin Thomas set the clubhouse target on day two of the US PGA Championship with overnight leader Rory McIlroy still to begin his second round.

The American world number nine hit a second 67 to move to six under par, one clear of Northern Ireland's McIlroy.

Scoring was at a premium on a blustery morning at Southern Hills in Oklahoma, with Thomas one of a handful of players from the early starters to make a move.

Four-time major champion McIlroy started his second round at 19:36 BST.

England's Matthew Fitzpatrick was one of the few trending in the right direction on Friday, moving to three under par for the tournament before dropping his first shot of the day on his 13th hole.

The 27-year-old, whose best major finish was joint seventh at the Masters in 2016, bounced back with a birdie on the seventh - his 16th - and scrambled two pars to sign for a 69 and three-under total.

Former world number one Dustin Johnson and current occupant Scottie Scheffler look certain to miss the cut after both slumped to six over par - Scheffler after inexplicably dropping two shots on his final hole.

Thomas started the day two behind McIlroy and moved level with two birdies in his opening four holes, having started on the 10th, in what was an assured round from the 2017 champion

A bogey on the par-three 14th checked his momentum but a run of eight pars followed before he finished in confident fashion with a birdie on the long fifth before walking in a birdie on the final hole to post a second successive 67.

"I enjoyed it a lot, it brings out a good part of my game and I am comfortable in it," said Thomas about the conditions.

Two-time major champion Johnson was out alongside his compatriot but looks set to be heading home after posting a three-over 73 that included a double bogey after hitting into a stream on the par-four seventh.

That put Johnson at eight over and although he finished with two birdies, he will be heading home early.

Scheffler, fresh from his Masters triumph last month, is another staring at an early exit after he struggled to get to grips with the Tulsa venue and also ended the day at six over.

He was in a marquee group containing the world's three top-ranked players, but followed Thursday's 71 with a five-over 75 on Friday that unravelled on his back nine.

Scheffler started at the 10th and after carding nine pars in a row posted four bogeys either side of a birdie down the stretch before a double bogey at the last left him two outside the projected cut line.

Open champion Collin Morikawa also endured a tricky morning and he faces a nervy wait after finishing at four over, while Spaniard Jon Rahm heads into the weekend at two over par after a one-under 69.

Two-time winner of this event Brooks Koepka posted one of the early rounds of the day with a three-under 67, an eight-stroke improvement on his opening 75.

The majority of players towards the top of the leaderboard are among the late starters. They enjoyed the better of the conditions on Thursday, and look set to do so again on Friday with the wind starting to drop.