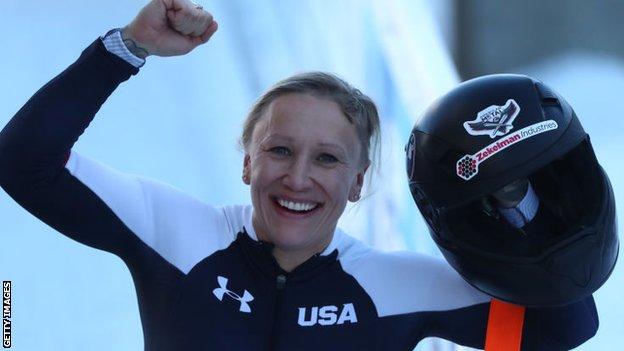 After a red-eye flight across the Atlantic, Kaillie Humphries' Olympic dream was riding on a series of history and geography questions.

"Who was the American president in World War One?", "Name one of the longest rivers in the United States" and "Name a state that borders Mexico".

With less than 10 weeks to go before Beijing 2022, the Canadian-born double Olympic bobsleigh champion was fit and at the top of her sport - but without an American passport, she was not going to compete in China.

She had quit the Canadian national team three years ago after making allegations of abuse and harassment against a coach, and had since been competing for her American husband's homeland.

However Olympic rules state competitors need to be citizens of the country they represent - effectively to stop countries poaching athletes just for a Games.

For Humphries, that meant months of "of paperwork, a lot of back-and-forth phone calls, a lot of sleepless nights" while the immigration process ran its course and the Olympic clock ticked down.

And of course she still had to train for a Games, without knowing if there was any point.

"I'd be lying on the couch saying, 'What is this even for?' Why kill myself in the gym?" the 36-year-old told LotterryTreasure Sport.

Then one day she finally got the email she had been waiting for inviting her for her citizenship interview and test in San Diego - but getting there was not going to be straightforward from 5,000 miles away in Europe.

Still, just getting to that point had also been far from easy.

Humphries 'knew career in Canada was over' after abuse allegations

Humphries won her first Olympic gold at her home Games in Vancouver in 2010, defending the title four years later in Sochi and then taking bronze at Pyeongchang 2018 to rank as Canada's most successful Olympic bobsleigher.

Her 2018 Olympic medal was the final time she competed internationally for Canada after filing a harassment complaint with Bobsleigh Canada and sitting out the 2018-19 season while it was investigated.

She stunned Canada when she announced in 2019 that she wanted to be released from the national set-up to compete for the US because she could not "return to a work environment that I do not believe is safe".

"If I chose not to leave and seek my release I would still be under investigation and sitting on the sidelines - it is how athletes' careers end," she said.

"I knew my career in Canada was over regardless of the outcome and the only shot I had at continuing to be an athlete was to go to another country.

The dispute is still ongoing as a new investigation was ordered after the initial one was ruled to be not 'thorough' enough in finding her allegations could not be proven.

'Motivated by hope' - training with no guarantees

Humphries says she has never regretted leaving Team Canada with no guarantees of a US Olympic spot, even if she "realised it was going to hurt just a little bit" to watch the Games and not be there.

"What kept me motivated was hope," she said. "If the option came I wanted to be able to stand on that line and know that I was ready to go and that meant working as hard as I can until it was out of time and I got told 'no'."

"Kind of like racing, it's not over until it's over."

She credits her family and those around her for getting her through "plenty" of times when the doubts crept in during the months of waiting for updates on the immigration process.

On those occasions her husband would go and train with her in the gym they built in the garage during the pandemic, or she would go to her sponsor's house to work out alongside her.

The support and training paid off, with Humphries winning three world championship medals under the American flag. But with less than three months to go before Beijing 2022, she still did not know if she would be there.

She had headed to Europe in November 2021 for the World Cup series, aiming to gather Olympic qualification points, when she was told that a date had been set for her citizenship interview.

It was in the middle of a race week - and to fulfil her dream, she needed both the points and the passport.

Luckily, the race was at Germany's Altenberg track where Humphries had won two world championship golds earlier in the year and so she knew it well.

She had also swotted up on the questions she was likely to face in the test at the citizenship interview - she would get asked 10 from a list of 100 and there was no multiple choice.

"I trained on the track on Tuesday, Tuesday night I drove to Frankfurt, which is about five hours away, Wednesday morning I flew to the US," she said.

"Thursday morning at 8am I had my interview, and Thursday afternoon at 1pm I got back on a plane. I got in [to Germany] on Friday at about 4pm and then I raced Saturday morning at 9am."

She even triumphed again on Sunday, sealing a double in the two-woman and monobob in the ultimate celebration of becoming a US citizen less than 48 hours earlier.

Earlier this month she was named in the US team for Beijing and goes into the Games having finished the World Cup season second overall in the monobob - which is making its Olympic debut - and fifth in the two-woman.

'Motivated for a country that believes in me' - Olympic success on cards?

Humphries has called on the International Olympic Committee to make changes so that others who speak out about alleged abuse do not see their Olympic dreams jeopardised.

"There needs to be a refugee team for safe sport," she said. "If you have an open claim, if coaches are being investigated as the athlete you shouldn't have to sit out.

"Russia gets an option - they have a known doping country as a whole and they still got to compete under the IOC flag. How do athletes who speak out not have something that will allow them to compete - why do they continue to get punished further?"

She does, however, now have a flag to compete under and says she would dearly love to give back to the country that gave her a "lifeline".

"I feel more empowered and more motivated now to go out and perform to the best of my ability because I have a country that believes in me," she said.

"I was told at the beginning it was going to come down to the minutes, weeks and months before and it has, it hasn't been easy but it has been worth it 100%.

"Hopefully I can bring home some medals but competition is stiff and I am just going to do the best that I can."

Who knows, maybe one of those citizenship questions will one day be about a Canadian bobsleigh champion who won an Olympic medal for the United States.