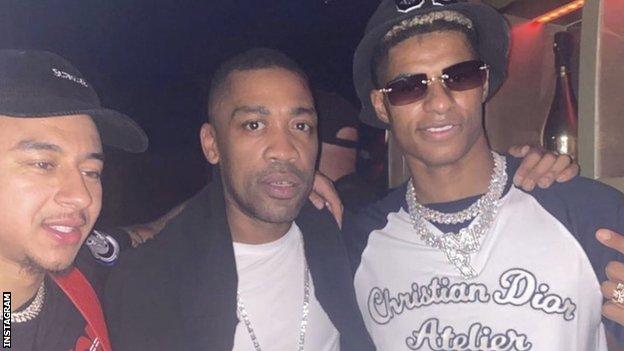 Marcus Rashford says he does not condone discrimination "of any kind" after being criticised for posing for a photo with controversial rapper Wiley.

Rashford and Manchester United team-mate Jesse Lingard were pictured with the grime artist this week in Dubai.

"I believe tackling anti-Semitism in and outside the game requires a greater level of attention," Rashford tweeted.

Wiley was dropped by his management company after his outburst two years ago and has had a number of his social media accounts closed down.

"This picture has been brought to my attention which I understand now, given context, could easily be misconstrued," England striker Rashford added.

"I would like to reinforce that I do not and will not condone discriminative language or behaviour of any kind aimed at the Jewish community or any other community."

Rashford has previously spoken out against racism and was widely hailed for his response last year after becoming a target for abuse following his missed penalty in the Euro 2020 final.

He has also been praised for his activism, most notably his campaign against child food poverty, and was made an MBE last year.

Lingard echoed Rashford's response on social media, tweeting: "I want to make it clear that I do not condone any form of racism whatsoever."