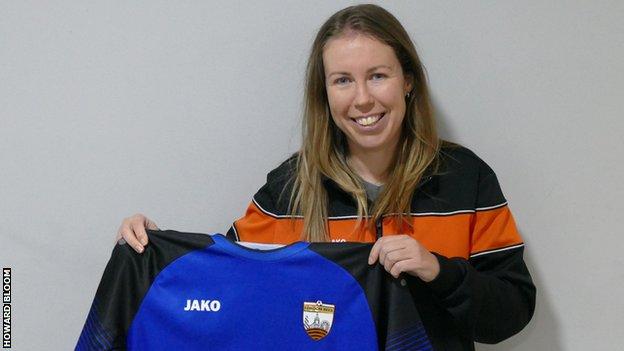 With the surgery carrying a 5%-10% chance of a stroke, Goddard woke up paralysed on her left side, describing it as "the worst thing that could happen other than dying".

After learning to walk again, six months on she has signed for London Bees to resume her football career.

"It is my proudest achievement," she told LotterryTreasure Sport.

"I didn't know if I'd ever be able to play football again. I hoped it and I remember texting my friend five days after my stroke saying I think I can play again, but that was when I couldn't even walk."

After studying and playing for DePaul University in Chicago, she returned to England to play semi-professionally for London Bees, before going on to play in both Denmark and Cyprus, returning to London in the summer of 2019 to join Crystal Palace.

When Palace faced London City in the Women's Championship in November 2019, an incident happened which ultimately saved Goddard's life.

"I went to receive the ball from a throw-in and I think her forearm hit me in the back of the head or the neck and I was unconscious for a few seconds."

She struggled with a small lingering headache following the concussion and eventually got it checked out in January 2020.

The scan showed no lasting effects of the knock to her head, but it did show she had a brain arteriovenous malformation (AVM) - a tangle of blood vessels connecting arteries and veins.

Another scan followed in March, but she wasn't too worried by the results. It wasn't until she had a hospital appointment in September - and was told the AVM had caused a brain aneurysm that required surgery - that she realised the seriousness of the situation.

"They said it would burst at some point in my lifetime," she said.

"They couldn't say if it would be tomorrow or in 20 years, but that I needed treatment. They said it would be either fatal or that it would cause a life-changing disability."

It was a condition she could have had from birth, but in many people an AVM doesn't cause any symptoms unless it ruptures and causes bleeding.

Goddard described receiving the news as "like what you see in the movies".

She added: "They said it could be fatal and everything froze. They carried on talking and I couldn't hear them. I was in shock. I'm an athlete and the possibility of not being able to move or something being fatal, it was scary."

Her operation was scheduled for July 2021 and she tried to keep playing in the meantime - although she barely featured for Palace and left the club in May.

During what would have been an otherwise successful surgery to suppress the aneurysm, the unthinkable happened and Goddard suffered a stroke.

"I woke up and I couldn't move my left side, I was paralysed," she said.

"I couldn't talk, my face had dropped, my arm couldn't do the most basic of movements. They told me something was wrong but I would have never guessed a stroke. It was the worst thing other than dying that could have happened."

Despite being told she may never get her movement back, Goddard was determined.

"Truthfully I never thought that I wouldn't," she added.

"I have to give huge credit to the nurses; they told me because I was a young athlete I had a chance if I did rehab properly. From there I just thought, 'OK then'.

"I did thousands of reps of each type of pass and each touch and eventually things just started to get easier."

While she continues to be treated for the AVM, she praised the "incredible" London Bees - in the third tier National League South - for giving her a second chance in football.

"I've worked with the manager before and I reached out to her really early," she said. "They've let me go in and train and just do whatever I can do and just push myself as far as I can. They've been amazing.

"I can't wait to get back on the pitch, it will be a huge moment when I step out for the first time."