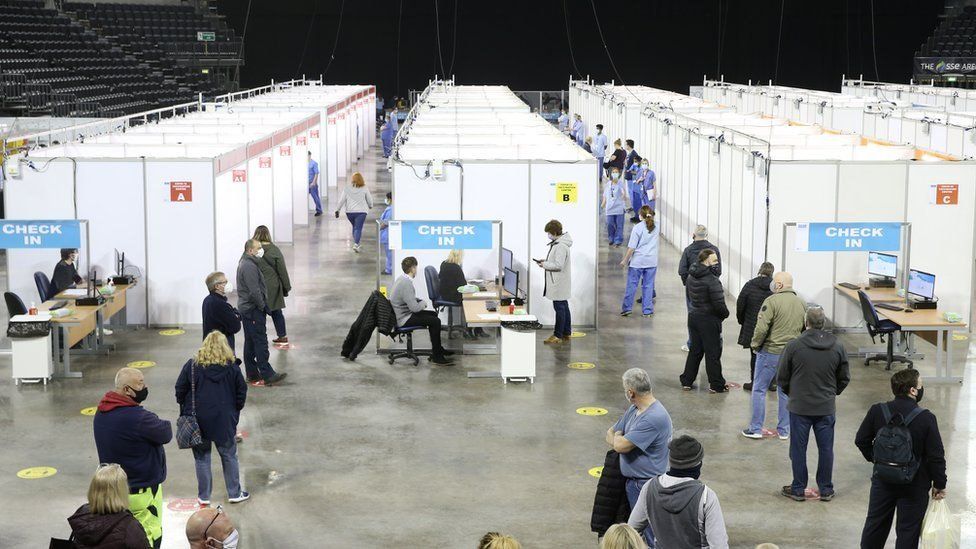 The gap between the first and second doses of the Covid-19 vaccine is to be cut in Northern Ireland.

Currently, there is a gap of about 10 to 12 weeks between the two doses of Oxford/AstraZeneca and Pfizer/BioNTech.

This will now be reduced to a maximum of eight weeks, the Department of Health has confirmed.

The move is intended to offer better protection against the Delta - or Indian - variant, which is more transmissible.

It is understood the first dose is just 30% effective against it, while this increases to about 80% following a second dose.

For those who have not yet been vaccinated, appointments for second doses will be scheduled no more than eight weeks after the first dose.

For those who have already received their first dose, scheduled appointments for second doses will remain unaffected and people should keep the date they have been given.

In a statement, the department said these people have no need to contact the health service as there will be no change to their arrangements.

It said the move "will accelerate the vaccination programme as it moves into its final phase and will ensure that people across NI have the strongest possible protection from variants of the Covid-19 virus".

While not yet officially confirmed,

While the number is small, it is the rate of increase that is worrying authorities.

The number of cases has doubled since the weekend.

Action was taken in the County Down town after the cluster was detected and more than 1,000 people have volunteered to be tested as part of the precautionary measures.

In January, the UK's between Covid vaccinations after criticism from a doctors' union about rescheduled appointments.

They said the Joint Committee on Vaccination and Immunisation (JCVI) was "confident" 12 weeks was a reasonable interval between doses "to achieve good longer-term protection".

'It's vital we move quickly'

On Thursday, NI Chief Medical Officer Dr Michael McBride said the decision to reduce the interval between vaccine doses had been taken following updated advice from the independent experts at the JCVI, who had considered the latest available evidence on the Delta variant.

"They have recommended reducing the dosing interval to help protect the community from the increasing prevalence of this variant and others that may arise," Dr McBride said.

"It's vital that we move as quickly as possible, with the supplies of vaccine that we have available, to ensure that the maximum number of people receive both doses so that they have fuller and longer lasting protection against the virus."

'We know this works'

Earlier on Thursday, Queen's University Belfast virologist Dr Connor Bamford backed the move to decrease the time between vaccine doses, saying it was likely to decrease the spread of the variant.

"It seems this variant can get past our first dose of vaccine," he said.

"So we need to make sure as many people as possible get their two doses and even think about decreasing the length between dose one and two because that's going to be critical going forward."

Dr Bamford added that surge vaccinations were being looked at: "We know this approach does work for other diseases."

A programme to actively chase up all those over 50 who have not received the vaccine is also being planned by health authorities.

While those numbers are not huge, transmission of the delta variant is causing a great deal of concern across the UK.

What is the so-called Indian or Delta variant?

Viruses mutate all the time. Most variants are insignificant, but some can make a virus more contagious.

UK scientists say the Delta variant - known as B.1.617.2 - is spreading more quickly than the Kent or Alpha variant, which was behind a surge in cases over the winter.